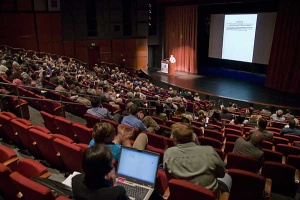 Participate in this major event that attracts large companies and leading research institutions from all over the world, specializing in the development of technologies applied to the geo-sciences, mining and oil extraction.

Run parallel to the 31st International Geological Congress (an event held every four years in different continents), GEOEXPO 2000 offers a unique opportunity to showcase your products and services to a public of over 6,000 professionals in this sector.

Covering an area of 10,000 m2, this exhibition will be also visited by guests, including professionals, entrepreneurs and authorities from all over South America. During the last two days, this fair will be open to the public.

With over 200 Symposia, 9 Colloquia and some 20 Workshops and Short Courses, 64 Field Trips and 80 international and 20 national meetings, the 31st International Geological Congress is scheduled for August 6th - 17th ,2000. Its core theme is "Geology and Sustainable Development: Challenges for the Third Millenium."

Over 2,000 exhibitors will be present at GEOEXPO 2000, from a broad range of the geo-sciences, as well as mining and oil extraction. Organizations of many sizes, including universities, research institutions and companies providing a wide range of goods and services will also be well to the fore at the South American version of this event, offering great business opportunities while firming up contacts with researchers, prospectors, technical experts and entrepreneurs from all over the world, particularly Latin America.

Famed worldwide as the Marvelous City, Rio de Janeiro offers all every facility needed for major international events such as the 31st IGC and GEOEXPO 2000. Covering 1,171 km2 in Southeast Brazil, the most developed part of the country, Rio is home to some 5.7 million inhabitants, with over 200 cultural centers (including cinemas, theaters and other show-houses), in addition to 82 museums and 76 libraries.

Its world-famous tourist attractions include Christ the Redeemer atop Corcovado, and the Sugar Loaf, with 29 beaches lining 45.8 kilometers of its magnificent shoreline. According to the Rio Convention & Visitors Bureau, the latest estimates indicate that Rio will welcome 1,500,000 foreign guests in 1998. A survey carried out by Riotur with the Brazilian Hotel Industry Association showed that 80.7% of foreign tourists stated that their trip to Rio exceeded their expectations, and 92.5% intended to return.

This event is being held for the first time in Latin America, a region that today draws massive prospecting investments of over US$ 2 billion dollars a year. Buoyed by intensive activity by major companies in the mining and oil sectors, it accounts for an impressive share of global ore production.

The host of this event, Brazil stands out in this context, not only as the largest economy in South America with a GDP of some US$ 900 billion, but also as one of the world’s most important producers of raw materials and minerals. Its huge and largely untapped geological potential -- particularly the rich gold, iron, tin, kaolin and bauxite deposits of Amazonia -- is equaled by the promise of its offshore oilfields.

The South American oil and gas markets offer exceptional growth potential over the next few years, particularly in terms of servicing consumer markets. Brazil produces some 1.2 million barrels of oil a day, meeting much of its consumption requirements through imports. In order to keep pace with this demand, the Brazilian Government is granting oil exploration and production concessions to local and foreign companies, with investments in this area forecast to top US$ 70 billion over the coming decade.